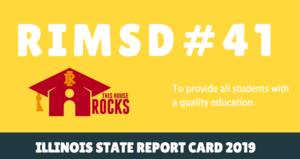 Rock Island Milan School District #41 is proud to announce that the district has made academic progress as shown by the 2019 Illinois Report Card released on October 30, 2019.

RIMSD#41’s commitment to excellence in promoting quality education and has improved in the following areas:

“I am excited about the progress that has been made over the past four years and I look forward to continuous, steady growth in the near future. RIMSD#41 is a district full of academic potential and community pride. With so many factors that have an impact on today's educational and instructional institutions, we should all be reminded that through hard work and dedication, we can achieve small wins. It is those small wins that will lead to more successful outcomes, making RIMSD41 the school district of choice for a successful and creative educational experience,” said Superintendent of Schools, Dr. Lawrence.

There are several factors that can be attributed to the district’s improvements. The district has implemented rigorous math and ELA curriculum for all students, enhanced professional development for both teachers and administrators, conducts progress monitoring walkthroughs, and is focused on cultural competence.

*Please note that the ISBE is still working to combine data elements and add to the report card.